The crisp etching is signed in pencil to the left and numbered ‘CLIII’ to the lower right.

Born 5th July 1851, in London. The British marine artist William Lionel Wyllie was the son of the artist William Morison Wyllie, and Katherine Smythe (nee Benham). Wyllie showed artistic talent from an early age. He attended Heatherley’s art school until the age of fifteen, leaving to study at the Royal Academy Schools, where he won the Turner Medal at the age of eighteen.

In the early 1870’s Wyllie became an illustrator for the Graphic. He held several exhibitions at galleries of the Fine Art Society and elsewhere. In 1889 he was elected an associate of the Royal Academy, and exhibited his work their in 1901, an event which greatly enhanced his reputation. Wyllie spent much of his time at sea working for the White Star Shipping Line, and serving in the Royal Navy during WWI. Wyllie painted seascapes and coastal landscapes, in which his treatment of light and atmosphere was the predominant feature, bringing to the paintings a feeling of peace and tranquility. His watercolours and oils portrayed a wide range of maritime subjects, from destroyers and battleships to fishing boats and sailing dinghies. It was his etchings and watercolours showing working life on the Thames and the Medway that brought him widespread popularity. Later in his life he played an important role in the restoration of the Victory, and this led him to paint, somewhat uncharacteristically, the 42 foot panorama of the Battle of Trafalgar, as seen from the stern of the French ship of the line Neptune. He completed the panorama in 1930 with the assistance of his daughter Aileen. Wyllie died on the 6th April 1931 in Hampstead, and scouts from the 1st Portchester Sea Scout Troop, which he had founded, rowed his coffin across Portsmouth Harbour for his burial at Portchester Castle.

The overall condition is very good.
The etching is very clean with no foxing or oxidisation.
The frame is in perfect condition. 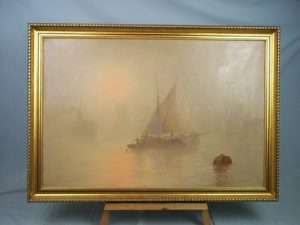 £6,250.00
~ William L. Wyllie Oil Painting Of ‘Barges In The Mist At Sunset’ ~  A very atmospheric oil painting  entitled ‘Barges in
Add to wishlist
Add to cart